Plastic money has become an integral part of our lives. It’s safer and more convenient than carrying cash specially credit cards which enable us to buy and then pay at a later point in time. Not just that, you can avail reward points and discounts while using them so it definitely makes it a worthwhile alternative to cash.

But given all the benefits of using cards, there are still a few issues with plastic money such as fraud due to phishing or someone copying off the digits from your card. Thus people are wary of using their cards online as well due to lack of security since nobody wants to end up giving their card details online on a fraudulent webpage and suffering losses. Online scams soared to an all-time high with over a half million people affected by scams in just the first half of 2016. There is the added misery of getting your card blocked and then waiting for a replacement card to be issued and getting any fraudulent transactions reversed. 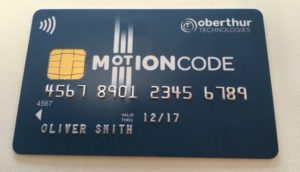 However what if the digits on the back of your card could automatically change and thus fraudsters would be left with unusable card details. Sounds cool right? Well that’s just what two French banks are doing to protect their customers from online fraud using high tech cards.

The technology is dubbed as Motion Code, and what it does is add a digital display to the back of the card that displays different digits randomly at the interval of every hour for upto 3 years. This will give a huge blow to fraudsters as they would not be able to rob you as such thefts only occur after a few hours or a few days once your card details have been stolen and thus there will be a very short window left to act. Moreover these cards look similar to the ones currently in use. You can bend, drop or even put it through a wash cycle without any issues. 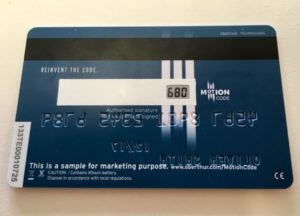 What we know is that banks see this as a hugely growing problem that needs to be addressed,” Aaron Davis, Business Director of Oberthur Technologies UK & Ireland, told The Memo. Oberthur Technologies is the French digital security company that has developed the tech, called MotionCode, and they’ve been making chip and PIN bank cards for over two decades.

Société Générale and Groupe BPCE, two of France’s largest banking groups, are preparing to roll out these cards across all their customers after completing a pilot scheme last year. There are other pilots underway in Poland and Mexico, and Davis is running Oberthur’s UK operation with the hope of getting a pilot or trial started with a UK bank soon.

Let’s hope someday this solution is implemented with Pakistani banks as well because this card is a huge leap forward for security and will help keeping your hard earned cash safe.